Bitcoin: Not the Crypto You Think it Is 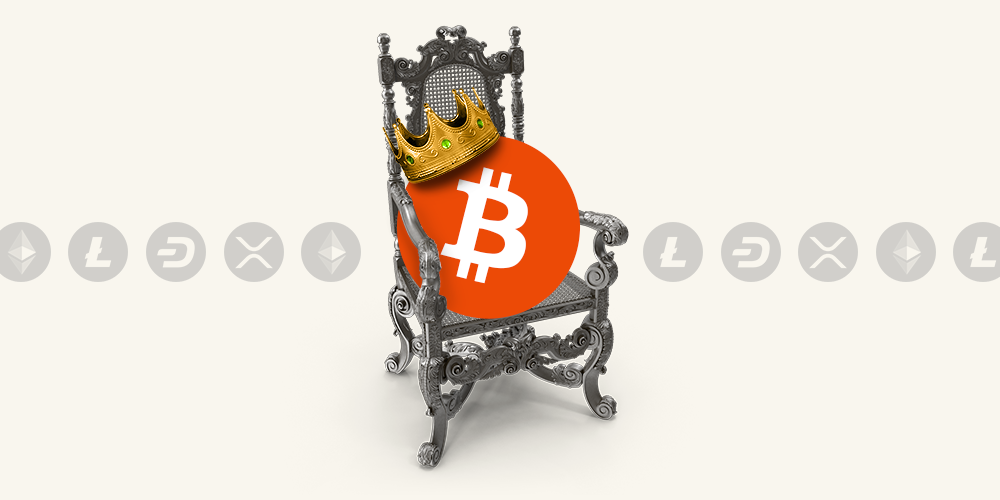 The word “crypto” has become so diluted that many projects have been lumped under Bitcoin's banner. Bitcoin is crypto, but crypto as a whole is unlike Bitcoin.

If you've been paying attention to the world of finance and culture over the last few years, the word "crypto" might spark one of many associations. For some, it's the future of money, the basis for a host of digital innovations that will upend traditional banking and financial institutions. For others, it's a criminal tool to launder money and evade taxes. And for many more, it's a mess of avaricious scammers, get-rich-quick hucksters, and climate-denying libertarian ideologues, all looking to cash in on a digital gold rush.

That last group seems to have gained the most traction as of late—at least in popular culture—turning the word "cryptocurrency" into a byword for greed, mania, and financial recklessness. It's a far cry from the word's original meaning, a word that at one time almost exclusively referred to Bitcoin. As new projects and coins have proliferated, the word cryptocurrency has come to denote anything built on any vague semblance of a cryptographic protocol.

Now, we're not here to gatekeep or police meaning. Language is ever-evolving, and the usage of words can and should change over time. There's value to diversity in a culture that adds, subtracts, and modifies words to better communicate the world around us. But in the case of cryptocurrency, this dilution of meaning has come at a great cost to Bitcoin, the original and still most prominent cryptocurrency.

But there is danger in this kind of linguistic drift, especially when it comes to complex financial systems and technologies. Why?

Because Bitcoin possesses several properties unique to Bitcoin and Bitcoin only, qualities that are at risk of being forgotten as the word cryptocurrency becomes a catch-all for an increasingly chaotic collection of related terms and systems.

Let's be clear: Bitcoin is a cryptocurrency. It is the first and most well-known project built on cryptographic protocols with the express purpose of creating a decentralized system of digital cash and digital value. But Bitcoin is not like the others. Let's explore why:

Bitcoin was created to be digital money, a peer-to-peer electronic cash system that could be used by anyone, anywhere, without the need for permission from any central authority.

From the very beginning, Bitcoin was designed to be different from fiat money and traditional payment systems, an antidote to Modern Monetary Theory's (MMT) inflationary fiscal policy that has led to currency debasement and the continued erosion of purchasing power.

Its hard supply cap, decentralized governance, and energy-intensive proof-of-work consensus mechanism were all engineered to ensure that Bitcoin could not be manipulated or debased in the same way that fiat currencies are.

In this respect, Bitcoin has been an unparalleled success. Its purchasing power has increased steadily over time while remaining largely immune to the kinds of price manipulation and inflationary policies that have plagued fiat currencies. Furthermore, its never been shut down, censored, or controlled by any government or financial institution, making it the first truly global form of money.

Other Technology Experiments Seek to Be Something Else

This isn't to say that these projects are bad or that their native tokens are worthless. On the contrary, these projects are often very innovative and their tokens can have a lot of utility. Still—they're not money, they’re technological experiments.

While Bitcoin was designed to be digital money, other cryptocurrencies have taken a different approach, seeking instead to provide alternative solutions to different problems.

Ethereum, for example, bills itself as a "world computer" that people can use to build decentralized applications and smart contracts. And while Ethereum can do some pretty impressive things like run DAOs, DeFi, and NFTs, it is not money. It is a platform for novel tech applications first and foremost, and while it may be used to transact value, that isn't its primary purpose. Anything can be used to transact value—from seashells to cigarettes—but that doesn't make it money.

Similarly, while projects like Filecoin, Sia, and Storj seek to provide decentralized alternatives to centralized storage solutions like Amazon, they are not money. They may have their own native tokens that are used to incentivize participation in their networks, but those tokens are not money.

This isn't to say that these projects are bad or that their native tokens are worthless. On the contrary, these projects are often very innovative and their tokens can have a lot of utility. Still—they're not money, they're technology experiments.

A core pillar of crypto's ethos is immutability—the idea that once something is written to the blockchain it can never be changed. Well, it was part of the ethos. We have since seen a number of both high-profile crypto projects prove that "crypto" no longer means immutable.

The most notable example is Ethereum's hard fork following the DAO hack. While the hard fork did result in the successful recovery of funds, it also resulted in the creation of two competing Ethereum chains and a permanent split in the community.

And most recently, with the Terra-Luna's collapse, we have seen that blockchains can be shut down completely and unilaterally; and when they are, there is little that users can do about it. While the Solana project is still in its early days, there have already been a number of issues that have raised concerns about its viability. Recently, a Solana bug related to cold-storage transactions forced validators to restart the network, leading to over 4 hours of downtime. It's not Solana's first tango with downtime either. In 2022, the blockchain has experienced 12 network outages, averaging 2 a month. For a blockchain that is meant to provide an alternative to centralized solutions, this is hardly encouraging.

These incidents make it abundantly clear that, contrary to popular belief, crypto is not immutable. If the community doesn't like something that's happening on the blockchain, there is always a way to change it. This isn't necessarily a bad thing—immutability isn't always desirable in every case—but it does mar crypto's once spotless reputation in this regard.

Bitcoin is immutable. Crypto as a whole is not.

Many crypto projects have consensus mechanisms that are far more centralized than they would like to admit. Many have founders with majority stakes who can single-handedly make decisions about the future of the project. And many have small, closely-knit communities of developers who wield a disproportionate amount of influence.

In other words, decentralization is often more of a goal—sometimes just a shiny buzzword—than a reality in the crypto space.

This is not to say that crypto is completely centralized. But it is to say that many projects are far less decentralized than many think. Decentralization is yet another supposed property of crypto that has degraded over time.

Bitcoin is decentralized. Much of crypto is not.

How Bitcoin is Different

Bitcoin is boring. But for a monetary protocol, boring is best

There's no argument that Bitcoin's immutability far exceeds that of any other crypto project. There's never been a transaction reversal or a major underlying protocol change in Bitcoin's 10+ years of existence.

Similarly, Bitcoin is also much more decentralized than most other crypto projects. Across wallet and node distribution, hash rate, development, and more, Bitcoin is more evenly distributed than any other project. And while some might argue that Bitcoin mining may tend toward increased centralization, this is largely due to the economies of scale that come with any manufacturing process and is not inherent to the Bitcoin protocol. Furthermore, the mix of mining entities changes over time, with different miners coming in and out of the space as profitability ebbs and flows. And as renewables make cheap energy more geographically dispersed, we will likely see a more diverse set of miners in the years to come.

Bitcoin cares about keeping its base protocol sound and its network secure. That's it. It doesn't have any other goals or objectives. It doesn't try to be everything to everyone.

And that's Bitcoin's greatest strength. By being focused and by doing one thing—and one thing only—Bitcoin has become the most trusted, most secure, and most reliable form of money.

In tech, there's the adage "move fast and break things." That Silicon Valley mantra works well with companies, but it doesn't work so well when it comes to money. We can't afford to move quickly and precariously with an emergent, global monetary system, which is why Bitcoin's slow and steady approach is so important.

Other cryptos will move quickly, break things, and do so with more centralized approaches, which may work well in the short term. But over time, these projects will face more headwinds, as their networks have brittle protocols with high systemic risk.

Bitcoin is boring. But for a monetary protocol, boring is best. By keeping the base protocol consistent, it allows for innovation on the margins in the form of layered architectures—like the Lightning Network—that can help Bitcoin scale to meet global demand. These applications can be built on top of Bitcoin without having to worry about the core protocol being changed or altered in any way.

In this way, Bitcoin is like the Internet—a global, open network that anyone can build on. And just as the Internet has given rise to myriad new and innovative applications, so too will Bitcoin

None of this is to make a value judgment of the projects and coins within the "crypto" taxonomy. Rather, it's to point out that Bitcoin is often lumped in with these other projects, despite being opposed to them in terms of ideology, design, and implementation.

Many crypto projects are likely to have utility and create value through their innovative use of technology. But Bitcoin is the only project focused on being a censorship-resistant form of money, which is why it continues to thrive, even as other projects have faltered. It's done that since its existence, has the lowest systemic risk out of any other crypto, is the most decentralized, and is the most secure.

Bitcoin is crypto, but it isn't "crypto." It bears its original ethos, but the "crypto" label has mutated into something else entirely. And that's okay, but it's important to distinguish why Bitcoin isn't like the others and why that's its greatest strength.

A Crypto Company Built to Last: How NOAH is Different

Discover why NOAH is different in the world of crypto companies. We know how to weather the storm—we're built to last.

In this article, we'll explore the consensus mechanism and how it underpins the security of cryptocurrency networks.

Top 10 Crypto/Bitcoin Quotes of All Time

As the world of Bitcoin and cryptocurrency continues to evolve, we take a look back at some of the most insightful and thought-provoking quotes about our favorite currency.